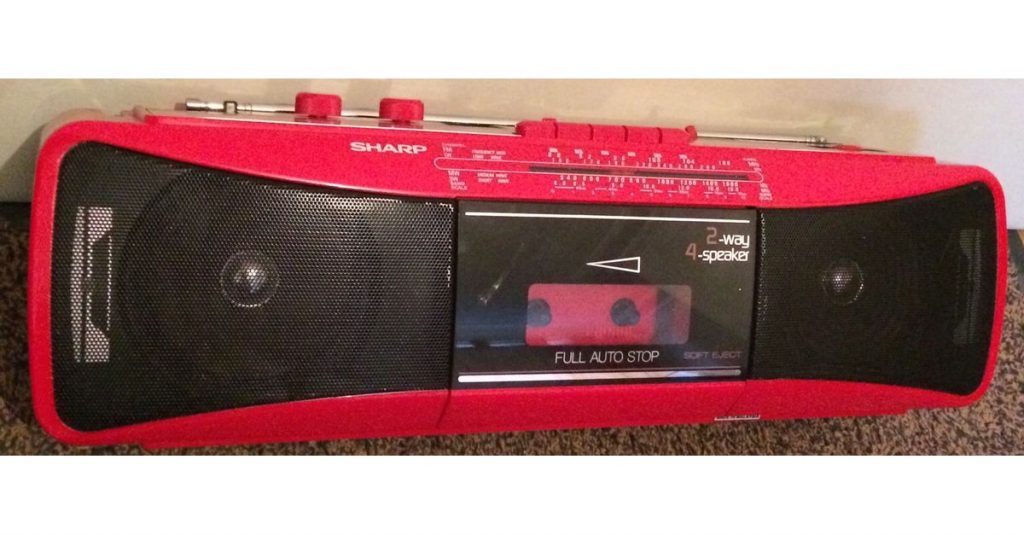 Though South Africa has gone through drastic changes over the years and has been pretty epic, I have only been alive for 26 years of it. From marabi to kwaito, the landscape of South African music has been mapped as rough terrain. However, my knowledge of this starting with a radio DJ by the name of Barney Simon blaring out of a red Sharp cassette player that my parents gave me for my 10th birthday.

It’s after ten and I quietly switch my dad’s old radio on and softly tune to Barney on 5FM. With an infamous ridiculous intro, he informs much of my musical upbringing. He becomes my hero and every night he teaches me something new. The first time I hear The Smashing Pumpkins’ Bullet with Butterfly Wings, I know I am in love. Even when my mother barges in and switches off the radio, I feel like a legend knowing just that much more.

With most of my friends growing up in homes where rock music was deemed just a little too close to Satan for comfort, the first Metallica tape playing on my best friend’s stereo was a revelation.

I go to my first concert in my first year of high school. It’s the Gunston 500 Beach Festival. I see Qcumba Zoo, Sons of Trout, Shuttermouth, Noa Noa, and Scabbie Annie. After I hear The Springbok Nude Girls play to the backdrop of the Indian Ocean roaring, I realise I would be a slightly altered person.

In the years to follow, I discover South African music, new and old, from classic LPs that never quite made the RPN Stereo playlist to Lithium, Squeal, The Usual, Egyptian Nursery, Karen Zoid, Original Evergreen, and even Kreesan. So much music, so little time.

In comes the late 90s and kwaito becomes the biggest thing ever. White kids buy it. Clothing labels kit it out. Jazz gets sponsorship at national arts festivals. Black is cool. Bongo Maffin is in. Sipho “Hotstix” Mabuse is in. Boomshaka rocks the boom boxes. TKZee makes it cool to be not black but like black music. Every white kid knows Mandoza’s “Nkalakatha”. It becomes everyone’s ringtone.

I’m 15 and the awkward kid in the front row listening to Saron Gas play what is to be their last gig in Durban. I buy their CD for R50, scraping together the dregs of my allowance. Damn, I know I shouldn’t have bought that last beer. Shaun Welgemoed, as he was known back then, asks me if any other Indian chicks listen to rock. I shake my head as I see that I’m the only Indian there. Underage, noggal. It becomes a theme – a thorn in my side.

I discover Boo! Battery 9, Koos Kombuis and Wonderboom… suddenly I’m a senior and going to the National Arts Festival in Grahamstown. I buy the quintessential South African compilation CDs, My Generation, including music from the likes of Granny Smith, Henry Ate, Leonel Bastos and Nine. My first road trip is marked by Amersham’s song Matchbox.

I could have stuck with whatever was playing on the radio. Or taken Just Jinger without considering the rest. But I take the dusty, unfamiliar road that sounds best and hurtle on to trekking hundreds of kilometres to Splashy Fen; the sounds of the Hairy Legged Lentil Eaters, Sugardrive, Arapaho, Urban Creep, and Syd Kitchen setting my ears alight. Then to White Mountain Folk Festival. Then to Woodstock. Bathing in freezing rivers. Baking in the Drakensburg sun.

It’s as if time stands still in these places, while the rest of the world spins. I never really did the drugs thing. I never needed it. This is why.

It’s 2002 and I start university. While everyone else is easing themselves into Hip Hop and Rap, here I am, immersing myself in the sounds of South African rock. Radios blast Aqua’s “Barbie Girl” and Nelly and Kelly’s “Dilemma”. My car stereo sports The Finkelsteins. Max Normal becomes a familiar sound. I even step out of my comfort zone when Tumi and the Volume made it out of Jozi and into Durban shops.

Among the deluge of international bands like Skunk Anansie, Massive Attack, The Prodigy and Counting Crows coming to the now free South Africa, somewhat appeasing the crowds which had supported them with no reciprocation for years with one hour-long shows, we had Fokofpoliesikar reinvigorating the Afrikaans language with a new Afrikaans identity. Their songs become anthems. And not a single student smoking weed in the dodgy park of the University of Natal doesn’t, at some point say to a passing police van “fok jou polisieman!” The lads from Belville would become an institution. So will its subsidiaries, Van Coke Kartel, aKing and Die Hewels Fantasties. In short, VanFokKingTasties.

I start training to become an entertainment journalist and photographer, and while the late music bloomers get into Prime Circle, a “Nickleback’s worst hits” cover band, my generation starts to form their own bands. I was awed by people my age like Hog Hoggidy Hog, Fuzigish, Lark, Cutting Jade and The Narrow getting up on stage and pulling crowds at places like Burn and The Winston.

Standing in the photography pit at every gig I could get into, I try to capture every moment on my dad’s old Canon AE-1 until I can afford my own D-SLR. The stench of the mosh pit behind me, the sweat of the artists before me, the flying plectrums, breaking guitar strings and the occasional flying drumstick are immortalised in my hands.

Burn, an establishment of epic proportions in Durban, seedy and smelling of stale beer, smoke and weed, played host to Seether when they were still cool, and The Winston still plays host to dodgy metal bands and dodgy floating bits in the beer. I inhale a cockroach at The Winston. It doesn’t deter me. Rather, it introduces me to the young Fire Through the Window, Tree Houses on the Sea and The Otherwise. The place may smell like urine, but it’s a piece of heaven.

Postgraduate studies hits, and amid writing a thesis, I start travelling around the country. Golden sunlit roads give way to dirt pathways. Festival hunting makes pitching up a tent on the side of the road a habit and the old smelly tent begins to feel like home. I discover Freshlyground, the epitome of South African goodness, and Goldfish and Captain Stu, who kind of put Cape Town to music. The Gauteng bands blow my mind. Desmond and the Tutus, Dear Reader and Zebra & Giraffe become regulars on my iPod rotation, amid the epicness of Muse and Radiohead.

Metal starts to seep into my ears too with 16 Stitch and Perez. A random weekend trip to Johannesburg ends up at MotherFudd Festival; dirt and mud in the middle of nowhere, with the best boerewors I have ever tasted. The hippie scene also gets some action with Dan Patlansky and Guy Buttery making the artsy types swoon. Reggae gets some attention with the Tidal Waves – original music for original people – or so their tagline goes.

The final year of living in Durban and I go wild trying to live it all in a day. My friends and I draw straws and I am driving to Grahamstown. John, Paul, Ringo and George piled into a Beach Buggy, we set off into the sunrise. We sleep at a petrol station. We wake up under mango trees. Slide down a hill in a guitar case, too tired to trudge. Arno Carstens and Ard Matthews gracing the stages unplugged.

I am 25 and at my first Oppikoppi. An institution in the history of music in this country, it introduces me to Isochronous, kidofdoom, Crashcarburn, Wrestlerish, The Dirty Skirts, Cassette and Foto Na Dans, amid the thick Northam dust, drunkenness and madness. I feel, for the first time in my life, like I was missing out on real homegrown music. Ree-burth, an all-black metal band spell the antithesis of what this scene is used to. I don’t think we’re in Kansas anymore.

Smaller bands like Man as Machine, J and Sibling Rivalry dominate their local haunts, and no weekend is free in Johannesburg’s hangouts. Veterans like Taxi Violence, Bed on Bricks, 340ml and Evolver still roam around making music and entertaining their regulars. Some of the music stagnates, as is with most artists. Some groups are just happy playing to the local loyals.

Now, with the masses grasping to the ridiculousness of Die Antwoord and Jack Parow, small-timers like Alan! Let’s Move On still hang in the shadows. But they are there, peeping their heads out of their practice rooms every now and then to give us something magical.

The days of Barney Simom may have long gone, but DJ Jon Savage now informs much of what I know about our local scene today. Gems like The Sick Leaves and The City Bowl Mizers get some airplay between the ra-ra-ah-ah-ah-roma-roma-ma-gaga-ooh-la-las. My seventh Splashy Fen, and I am still learning. Where to from here is anyone’s guess. But the legacy of amazing music coming from our odd little country is undeniable.

Where to next? I have no idea. I’ll just keep taking the road that sounds best. After all, “nobody needs to know where we’re off to/we’re invisible alive/we’re the whispers in the scream”.