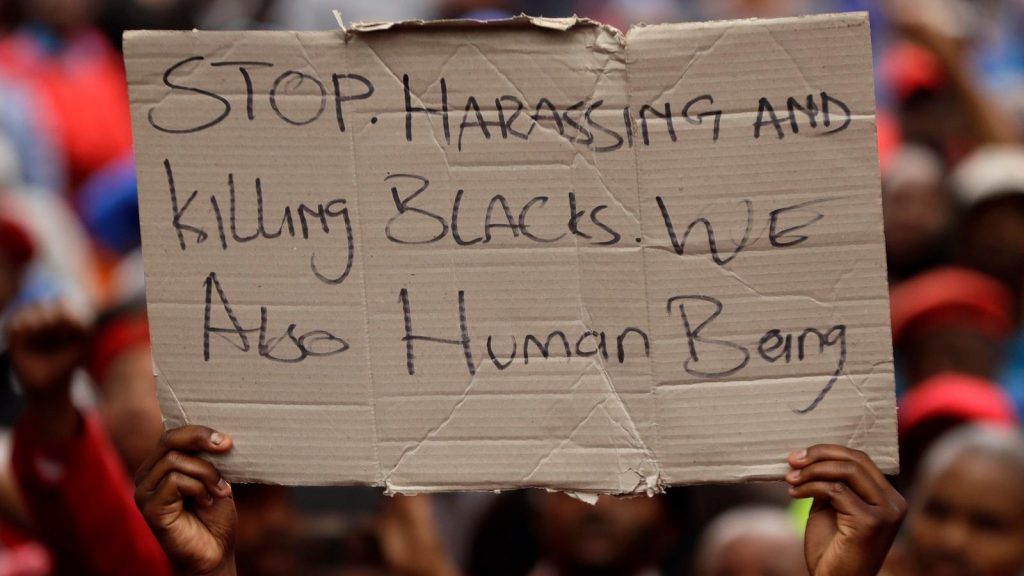 Black people are used to getting the raw end of the deal. For centuries black and brown bodies have been beaten, lynched, arrested, tried, murdered, executed, and more the world over. Whiteness has sought to crush the black soul, while cynically asked our bodies to stand up. And fight. So it’s neither new nor surprising when we see yet another crime inflicted upon a black person.

But damn, Aaron. You guys really outdo yourselves sometimes. Shoving someone into a coffin and then disputing the level of sadism in your act. Letting a shy woman sit in a cage at the back of your bakkie and then forcing her to tell your side of the story on camera so that you won’t get in trouble for your racism?

Seriously? SERIOUSLY?! Brenda, you’re always telling us how apartheid is done now and we need to get over it. You want olive branches, or better still, would you like to hold hands? Guys, racism is like, so 1600s. Get over that.

Rather, get over yourselves.

Yes, Gert. You know. You know full well what you are doing when you kidnap a person, accuse him of trespassing, beat him up, threaten to burn him alive, and put him inside a coffin. You’re fully aware of what you are doing. Especially when it’s peppered with racial slurs you think are perfectly fine to even think, let alone use in everyday language. And then you wonder what the hell you’re on trial for when all you did was exercise your supposed God-given right to damage another human being, as your people have done for centuries.

Yes, Becky. You know full well what you are doing when you shove a microphone into the face of a powerless woman who can barely look at you when she speaks, and coach her into giving the intended audience the answers that you want.

“So meneer gave you the lift. You didn’t want to climb in the front because you are used to sitting at the back. Just give the right story there,” you say to her.

And to top it all off, John here starts a petition for the US president (of course Trump) to grant white South Africans their independence. The signatories not only claim that South Africa rightfully belongs to white people because you were here before the dawn of time, but proceed to call black people “savages” who rape, steal, pillage, and claim the jobs rightfully reserved for white people.

“We are tired of being discriminated against!! We are excluded from partaking any job opportunities [sic] because of the colour of our skin,” writes Charles. Hmmm; No wonder you guys preferred apartheid.

Apparently, Fiona, you didn’t steal anyone’s land because you bought it with your pureness of blood (Voldemort much?), and according to one Stephanus, you didn’t have to worry about this “consent nonsense” under apartheid when wanting to have sex with a black person. (FYI, this is called rape.)

And then you throw your toys out of the cot when you’re called out for it. Yes, Lauren, I’m looking at you. And we’re tired. We’re goddamn tired of having to tell you over and over again, Dave, that this ain’t how life is supposed to be. But still, you plead ignorance.

So while we’re not surprised at all of this, let us tell you, Lars. We’re not taking this anymore. And if it means we rise up like the seas you crossed to take our lands, our riches, and our cultures, so be it. Because we are angry. Angrier than we have ever been. We can’t believe that it’s 2017 and we still have to tell you all this and add caveats to our truths to protect your fragile egos.

It’s like you never learn, Yolanda. And until you do, don’t expect us to be practising yoga with you.

Not when you’re the ones who brought the guns in the first place.