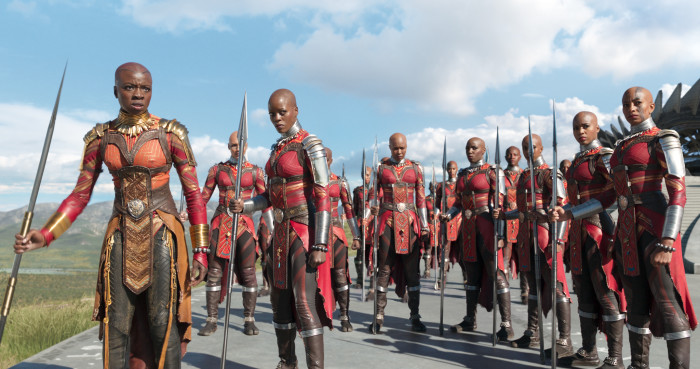 It has been the most anticipated film in South Africa since its announcement, yet nobody was prepared for all the emotion Black Panther was about to give us. Spoilers ahead.

Despite Hollywood’s beleaguered relationship with Africa and its representation thereof – that of a dry, dusty, and hopeless wasteland of war and famine in overtones of yellow and red – Blackness came out in all its glory at the film’s opening on Friday as beaded headdresses and traditional regalia made heads turn.

Africa on screen has always been a plot device. Black has always been a personality trait, and the continent as a whole has been there for white protagonists to save the screaming women and children – or for the antagonist to kill as the white protagonist builds up the courage to act along his hero’s journey. A mere backdrop for white people’s stories. In District 9, we got to see a little more of what we know to be true, with places we recognise and accents we’re used to being represented in ways we never saw before. But Black Panther was something different.

The fictional Wakanda could be anywhere in East Africa, but the accents were clearly from home, as John Kani introduced isiXhosa to the rest of the world. If you listened closely, you’d even be able to hear the sound of Babes Wodumo’s Wololo playing in the halls of Wakanda, Trevor Noah voicing Shuri’s advanced security systems, and the unmistakable style of Xhosa choirs in Ludwig Göransson and Kendrick Lamar’s original soundtrack providing the blackdrop for an incredible action film.

The aesthetics aside, which were brought to life by some of the film industry’s leading black filmmakers, the real magic lay in the politics that were sometimes brought out through humour (a character calling the one white man a coloniser) and heavy moments of commentary by many of the characters. The most notable theme being that the mind of the colonised will inevitably want to colonise. It was surprising that the trailer-touted bad guy played by Gollum with an Afrikaans accent was killed in the first half hour or so. The real bad guy isn’t even Killmonger himself but the broken and racist system that raised him.

The movie, despite the criticism that men still hold the power in the patriarchal Wakanda’s hierarchy, its portrayal of Nakia, Okoye, Shuri, and Ramonda are of unique badasses who have a mutually respectful relationship with the Black Panther, their king – a far cry from the deeply violent relationship with women Africa has built from the foundations of the colonial church.

Wakanda is what Africa might have been had the white man not stolen our rich cultures, identities, and resources. The message was clear in that white interference did more harm than good, and that notion of a savage Africa is something that needs to be left behind. The very fact that we are having these conversations now is testament to the fact that even though white supremacy is no longer enacted into our laws, it still exists and needs to be rectified and soon.

We are celebrating an all-black cast, but we need to ask ourselves why has it taken this long for it to happen, and why we are all going berserk over a Hollywood superhero movie while letting the banning of our very own Inxeba go unchallenged. There are many problems when it comes to representation of Blackness in entertainment media, but change starts here.

And Wakanda, no matter how fictional, is where the battle is beginning.