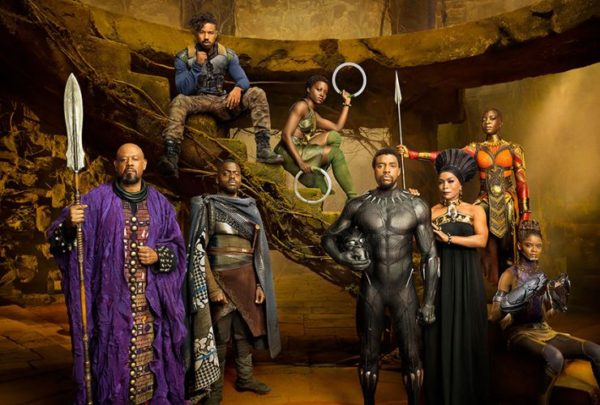 For the past 30 years, costume designer Ruth E. Carter has been designing power, femininity, and unapologetic blackness on screen. Now having three Oscar nominations, her work for Black Panther has elevated Carter’s trajectory, but she says it’s still in the same vein as her previous work but with Afrofuturistic costumes celebrating cultural pride and female resilience. Carter, a woman who has had to experience the US-sanctioned animosity toward women of colour, says it comes at a time when blackness and feminism are once again the targets of political and cultural attacks.

Being asked to design for Black Panther “is the highest of compliments and the biggest joy and celebration that kind of legitimises the culture that was looked down upon for so long,” she says. “It is storytelling that is important in our lives, and to give a global meaning to the cultures that already have so much meaning is personal.” Carter says whole it may be selfish to personalise it, this celebration of what her team has achieved is inspiring. “And I am so happy to have inspired this outpouring of expression.”

The movie was celebrated in every sense all over Africa with audiences in regalia in westernised shopping malls and in the streets for the premiere. Carter says she should have been there to see this pride being expressed all over Africa “because, by comparison, we’re still dressing up – as African-Americans – in what is considered ‘American’ norms”. She says Africa and African-Americans need more opportunities like this because our culture is lost in the midst of Louis Vuitton and Versace. “After all the work to present a proud African culture in Black Panther, our looks at the premieres were still a little colonised.” In that regard, Carter reckons African theatre-goers were a little more true to the spirit of Wakanda and share the ideal the team tried to achieve through the film.

Black Panther as a comic was created from a need for a civil rights movement hero in the 1960s, and was a seeking of hope and looking to the future, or to gain respite from the hard times African Americans were experiencing. However, the real-life superheroes like Malcolm X and Martin Luther King Jr made Black Panther a hero rooted in reality, even though he is fictional because he is the ideal that was rooted in people’s minds. Carter agrees saying, “There was no fantasy here or disconnect from what was happening in the US; the civil rights movement was about the dreamers who could envision a better future for African-Americans and in relation to Black Panther, they were thinking of a land of illusion in some cases.” She says Black Panther was well thought out and an answer to the burning question that African-Americans all had: “What would freedom look and feel like? We never knew and we might never know but to us, Wakanda is that ideal.”

“Freedom was always – and still is – an ideal that African-Americans have not attained so we do look at Africa as this place of abundance and perhaps idealise what our freedom would be in Africa,” Carter says. “But with the media putting more of a spotlight on Africa, it’s a rude awakening almost to see that Africa isn’t free so Black Panther and Wakanda in a way is a replacement of that imagined ideal.” She says this ideal is also noticeable in other superheroes, “This desire and deep want to be free is in every black hero. Like which African-American wouldn’t want to be bulletproof like Luke Cage, you know?”

Carter took inspiration directly from existing African cultures and histories and she says it was a challenge but a good one, filled with questions of whether it is appropriation or appreciation. “In designing this imagined reality, I had to go back to the artistry of Africa, because we couldn’t create a world that wasn’t already rooted in something real, else it would be completely unbelievable and removed from this ideal of a free Africa.” She says what the character of T’Challa wears is what real royalty would wear in some parts of Africa. T’Challa’s Kente scarf, known as nwentom in Akan, is a type of silk and cotton fabric made of interwoven cloth strips and is native to the Akan royalty of Ghana. “The similarities in dress in each character and each tribe to the actual clothing of African tradition represents iconic looks, but also a hope that one day these will be seen as clothing and not costumes.” Carter says the iconic products of the communities her team researched were a result of a process of research and more than research about periods in time, but the research of what royalty would look like. It wasn’t about dressing a superhero because “T’Challa is a king first, and a superhero second”.

There was also the tangible issue of the characters being able to move about with these outfits, so it was difficult. Carter says they ended up having to find workarounds. “Hence we 3D-printed almost everything because the actual beading would have been impractical considering the action scenes.”

Carter is all about integrity and she wanted to be as honest and true as possible to the original cultures without disrespecting them and being consistent with the uses of particular items, “like Romona’s headdress is a traditional Zulu headdress worn by royalty. We had to make many design compromises as a result of needing the actors to move freely but also staying true to the cultures, so we had to 3D print things to make them lighter and more moveable.”

For Carter and her team, it was a case of going back to the basics of design and telling a story through costume rather than just making them beautiful. |From an aesthetic point of view, we used traditional wear of the Himba, Turkana, Masai, and Ndebele tribes, among others.” However, they weren’t chosen just for the aesthetic. Each piece has specific meaning so the team researched that and brought in craftspeople who worked hard with their hands to create these masterpieces. Each traditional outfit can be related to a specific meaning and location, “so Wakandan dress is not entirely uninfluenced by the surrounding lands and not homogenised, something we avoided so as to debunk the idea of Africa as a country, which is a ridiculous notion”.

For example, she says, Danai Gurira as the warrior Okoye and her band of female fighters, the Dora Milaje, are in vibrant red and with heavy beading that represents a link to royalty. Lupita Nyong’o, as the spy Nakia, part of the river tribe, is in shades of green, which mirrors the Pan-African flag, showing her international status but also her river tribe’s link to earth and light. T’Challa’s repetitive triangle pattern is a traditional Zulu design but it also shows the geometric nature of Wakandan script and what ties the country together.

“Unfortunately, it wasn’t possible to travel to all the places the clothing came from, because there was just no time. We did remote research and sent out people to examine the clothing and enlisted buyers.” There were some people Carter’s researchers spoke to who discouraged the use of certain aspects of the culture and she says they respected that. “Some artefacts in the film are from different parts of Africa. I really would have loved to have visited myself, but I went to South Africa after the production and it was wonderful to be there and see the work come to life in a place that appreciated its meaning as much as we did.”

The film in and of itself tells the story not just of an African king trying to protect his nation, but a lost prince who had no place to call home. Being African-American, Carter says, there’s a sense of homelessness that follows them and “we really don’t know where our roots lie. We all know we’re mostly from West Africa, but we can’t trace our heritage, which is why the character of Erik Killmonger is so relatable and true to African-Americans.” She says, |It felt good to work on this film and kind of bring the roots of Africa to us, in a way, and connect in a way that we’ve not before.”