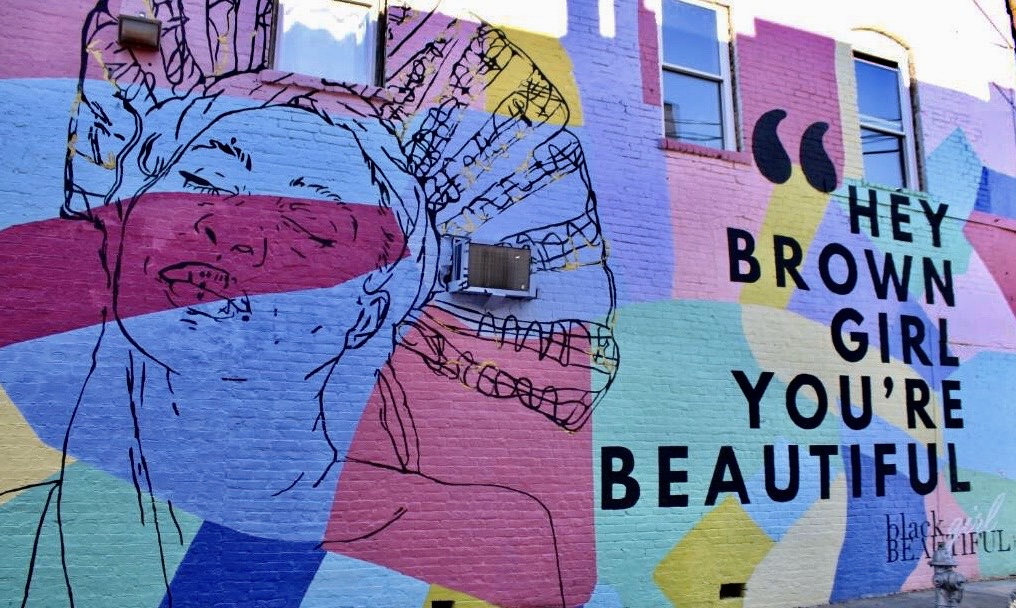 Since the vibrant mural reading, “Hey brown girl, you’re beautiful” appeared in Atlanta, Georgia in 2019, many melanated women have been posing in front of it, showing off their brown beauty. Since then, much has happened regarding brown women rising against the constant tide against us, including the mere existence of AOC and then Kamala Harris being elected the first woman of colour to become vice-president of the most contradictory country in the world. And I am here for it.

It reminds me of Leslé Honoré’s poem, Brown Girl, which was originally written in 2017 and updated this year to reflect Harris’ election into the vice-presidency. (I have my issues with Harris and her politics, but let’s not go there today.) Brown women have been showing us flames, not just in the world of fame and fortune, but in my personal life as well. This year, I was encouraged to start this blog based on my love for both makeup and, well, mayhem after starting a webinar series with three women whom I love and admire.

The reason I open with this post is that I am one who is blessed with melanin and for those of you who know my obsession with makeup, you’ll know what a wild ride it has been to find dark shades that don’t make me look like either a ghost or a plum, as well as the constant bronzer struggle. I was inspired by American beauty YouTuber, Nyma Tang, who was born in Ethiopia to South Sudanese parents. Something she said in one of her videos made me sit up and think why the fuck do white people love to talk about how strong and admirable brownness is but they refuse to have us in traditionally white spaces – fetishising brown strength but hating brown people.

The last straw this year was that woman on the bus who asked me why I am brown. I was like…

So many white people claim to not see colour (and Indian people in South Africa, but that’s another topic for another day, as well as is their colourism), but the truth behind this is that they don’t see us. If you’re colourblind, you are blind to our skin, our lived experience, our difficulties, and the racism we receive. Claiming that we’re so strong may seem like a compliment, but it’s really not. For many brown women, “strength” has an automatic association with silent suffering and the dehumanisation that accompanies this emotional denial – having to suck it up because there are “bigger problems” to deal with.

The strong brown woman archetype is based on centuries of pseudo-scientific experimentation on Black women that contributed to modern-day racial bias in physical pain management and has become a trope in society at large. The belief is that women of colour simply don’t feel physical or emotional pain the same way as white women. This assumption is dangerous and as much as brown women embody the “superwoman” image, it is largely to the detriment of our mental, physical, and emotional health. (We might be seen as superwomen but let there be a black Superwoman and see how white people lose their shit.) This stereotype has kept women of colour from expressing themselves, being believed in medical, legal, and social spaces, and respected in terms of self-expression – in the professional world too.

In the world’s toxic relationship with race, privilege, and power, and relationships of power are sustained in large part by collective denial and willful ignorance. That includes the idea of  “not really being brown”.

When I was younger and somewhat different from my friends in the majority Indian school I attended, I used to consider being “not really Indian” or “not like other Indian kids” as a compliment. We all know the implications: I was well-spoken, intelligent, cultured, respectable, and unique in my interests and career aspirations. I was everything that their limited interactions with brown people taught them most people who looked like me were not. I never realised every norm of brownness my white friends understood was rooted in false stereotypes. There is nothing exceptional about a woman of colour who reads HP Lovecraft or listens to Led Zeppelin or loves the creative arts, nor is it atypical if a person of colour is smart or cultured by white standards.

These stereotypes indicate that white people do not see brown people and our individuality is invisible, with whiteness preferring to see us as a homogenised group rather than people with independence of thought, emotion, and life ambitions. It assumes that white concepts of value in culture, intelligence, and beauty are the only ones that hold any merit in society. While that is true in working society because white power has made it so, it’s all a lie created to elevate white standards and devalue brown ones.

What does this have to do with makeup, you ask?

It has everything to do with how the world sees us and everything to do with how we choose to show ourselves to others. In the world’s insistence that we, as brown-skinned people with brown histories, aspire to be as white as possible, any sort of celebration and marking of brownness as good is undesirable for whiteness to flourish. Inclusion of brown skin under the banner of physicality – the first thing people see about us – is the acknowledgement that brown people are not only visible but valuable; something whiteness refuses to accept.

Having shades that accentuate our natural beauty is one of the many things that the beauty industry can do to recognise that people of colour are not only beautiful but worthy of investment in research and development in products in our colours and for our skin types. Our brown skin is gorgeous. We are the colour that traditionally signifies stability, structure, and support. Our skin absorbs the most powerful star in our solar system and radiates magic from it. We deserve recognition of humanity, beauty, and individuality. And if beauty standards require us to be lighter-skinned, we are here to disrupt all of these thoughts and break down these barriers. We’re not going to keep quiet until you listen.