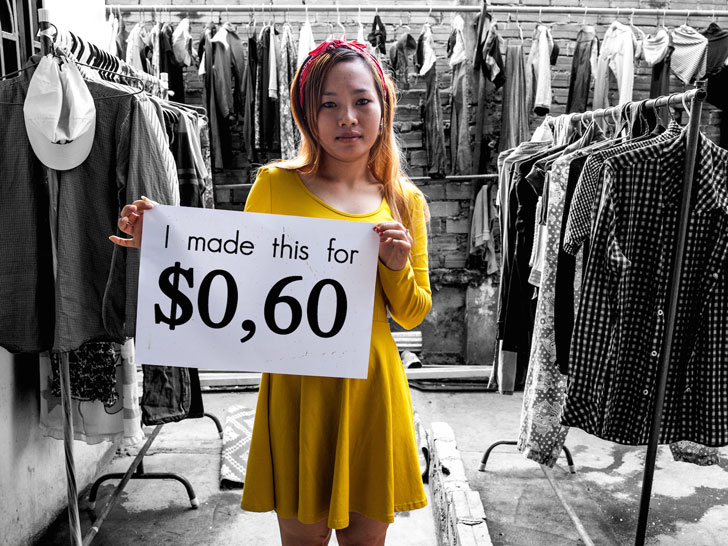 Consumers buy more clothes than ever before. Approximately 80 billion new pieces of clothing are bought every year and we discard at an increasing pace. With faster living in less space, clothing as sentimental heirlooms is now a thing of the past and with cheap clothing abundantly available, the things we wear have become disposable.

The market for cheap clothing is taking a toll on the environment. People bought 60% more garments in 2014 than in 2000 but only kept the clothes for half as long, according to McKinsey & Company. Fashion makes up 10% of carbon emissions and produces 20% of global wastewater, says a UN report. Textile dyeing is the second-largest water polluter. While sustainably-made items are becoming more popular, they aren’t the standard. Zara puts out 24 collections per year, while H&M offers up to 16, says the European Parliament. The UN reported much of this ends up in landfills; a truck of clothes is burned or dumped every second.

There is an alternative: Local fashion. But the price tag is enough to make anyone run to the next Forever 21. So why is this sustainable, slow fashion more expensive?

We know many fast fashion brands run sweatshops outside of their highly-regulated home turf in the EU. Many of these places are unsanitary, unsafe, and in some cases, use unsupervised child labour. The Guardian examined this following the story of Bangladeshi workers after a tragic factory collapse in 2013; a single worker made £0.03 in the time the company made £115 000. Oxfam interviewed many women in these kinds of sweatshops, some of whom make the equivalent of R3.50 an hour (€0.18).

Slow fashion does not have the profit margins of larger corporates but chooses to support employees under ethical conditions. Human rights are not cheap. Brands like Patagonia and Boden make garments within their home countries, pay above minimum wage, and stick to fair labour practices. Local brands tend to invest in the radical notion that workers should have fair, living wages. Fashion brand ABLE focuses on fighting poverty by offering fair, transparent wages, and creating jobs for women. It evaluates manufacturing partners in safety, quality, and wages to see the impact of its supply chain. With the stark contrast of labour practices in mind, it’s a no-brainer that fast fashion would be cheaper than local fashion.

The stuff we put onto our skin matters to consumers. But the impact these materials have on the environment doesn’t really cross our minds and it’s staggering to think that it takes 2 000 gallons of water to make one pair of jeans. Cotton makes up nearly half of the total fibre used in clothing. More than 90% of that cotton is genetically modified, using large amounts of water and chemicals: 18% of pesticides and 25% of insecticides worldwide. The amount of feed, land, water, and fossil fuels used to raise livestock for leather and tanning are responsible for many environmental issues. Around 70 million barrels of oil a year are used to make polyester and much of it will take hundreds of years to decompose. Synthetic fibres also use petroleum.

Local fashion has no need for mass-produced and highly-manufactured materials. Brands like Pact are making sure that from growing and harvesting their cotton to the final sewing and all processes in between are as clean as possible. This is costly because synthetics make up 70% of the market. For organic materials, you will most definitely have to fork out a little bit more. Many of these ethically-sourced and natural materials are produced with closed-loop water systems, which is also costly. Natural fibres have certifications to maintain, including the expensive Global Organic Textile Standard.

Design, manufacturing, distribution, retail, and consumption: The system is fiercely competitive at all stages, even for a plain white T-shirt. Fast fashion aims to lower costs at all stages, exploiting workers, natural resources, and the consumer. But fast fashion thrives because we keep supporting it. Brands rush to release collections catering to the growing demand for trendy fashion. We are disconnected from the people who make our clothing – roughly 40 million garment workers worldwide, many of whom do not share the same rights or protections that their company owners do.

Local fashion, while keeping to the same production model, ensures ethics at all stages. For the fast fashion business model requires a quick turnaround time, increasing exploitation. This drives the prices up for ethical businesses. Slow fashion needs quality control not just for the product but for the people working at every step of the process. Paying a decent wage and making sure that natural resources aren’t harmed means a higher price tag on the plain white T-shirt, even though it may look the same as MRPs. Research from Mintel says nearly half of consumers prefer to buy clothing from companies trying to reduce their impact on the environment, so it’s not all for nothing.

Unfortunately, it’s rare for a retailer to lose customer base over poor labour practices. Research shows most forget that products are unethically made. Many brands have programmes to ensure ethical practices but will exhaust workers in outsourced factories, not having to answer for labour rights violations in developing countries, where human labour is seen as cheap and expendable. Keeping costs down means keeping people down and the environment also pays for it. It’s worth the price tag when a company decides that the earth and its people are worth more than just another pair of jeans.