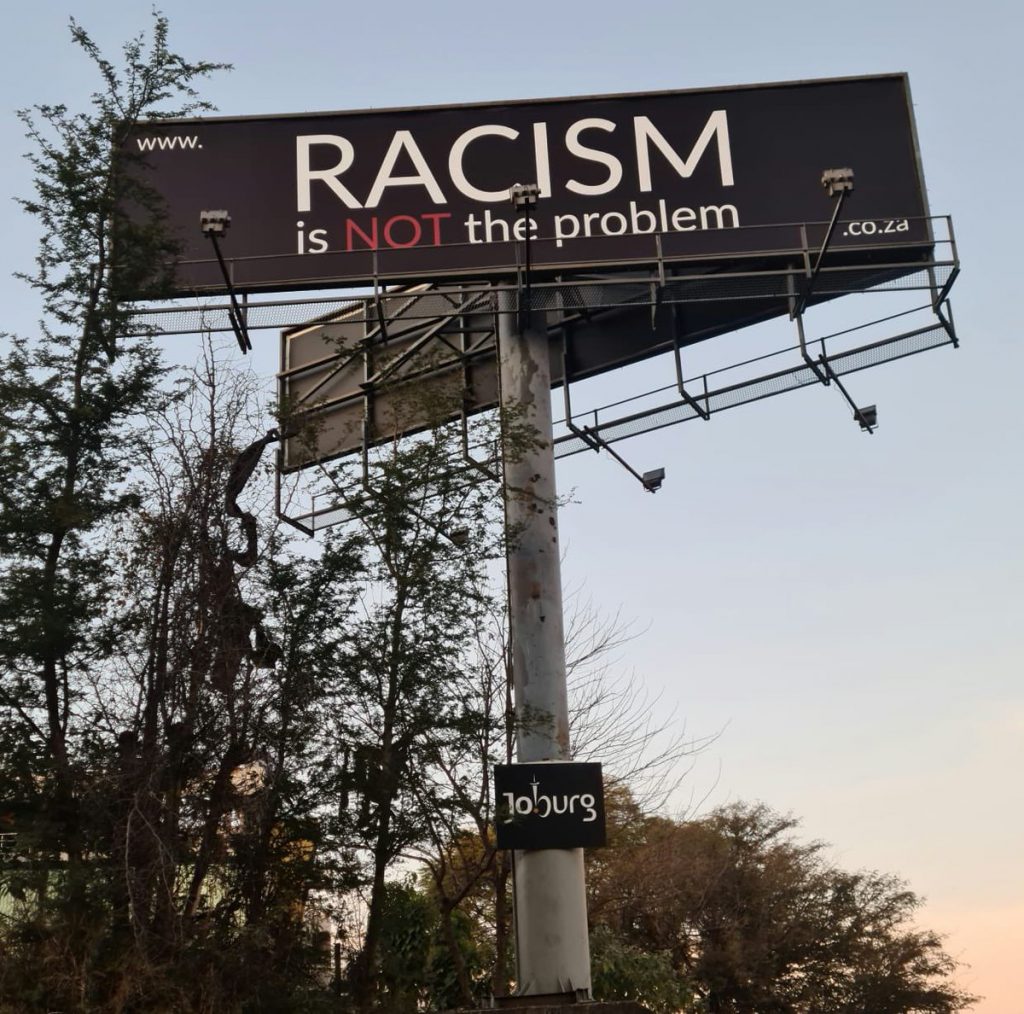 This piece was written for Busting the Myth of White Genocide in SA and appeared on the Busting Bad Myths Facebook page. I humbly thank the rabble-rousers at these organisations for giving me the space to write as I see it.

We all know that the South African Institute of Race Relations is basically the National Party Lite. The rhetoric spewed out by the organisation echo the sentiments of 1948 with a twist; instead of, “Let’s divide races”, it’s now, “race doesn’t exist and we’re all ostriches”.

Just take a look at this comment on the SAIRR’s Facebook page: “Time to end this endless race narrative. We were almost there and suddenly it became the biggest issue again. The activists got bored, had to start searching far and wide to find racism everywhere. And guess what, it’s creating more racism than there was. There will always be racists, but that doesn’t mean every system is racist. And the places with the biggest claims are the places with the least racism in history, not the most. Get real.”

Um …?
When were we almost there?
Wait, what?

The new gaslighting campaign by the SAIRR reads: “Race is not the problem.” Their vacuous fans on social media have been spouting things like, “Like the people who want it taken down, its [sic] the perpetrators of racism thats [sic] the problem and their twisted view of it” and “Why? Because there are those whose income and entire life depends upon being able to allege racism at every opportunity. It is a profitable business for some.” Someone, please get Mr Black-Coffee-is-the-only-Black-I-Like here a book or something.

The institute, which describes itself as a “classically liberal think-tank”, says it asked people (which people, we don’t know) what the biggest, unresolved issue in South Africa is and that unemployment, crime, corruption, service-delivery, housing, and education ranked high. “Racism was not the major problem identified in this survey, or any of the surveys we commissioned in the last decade,” the shark tank said. “As we see it, politicians use race as a means to further divide South Africans and distract attention off themselves.” It goes on to say, “Most South Africans live on the common ground of decency until a conversation turns to politics, policy, and what it means to be South African in the first place.” What speaks quite loudly here is the things unsaid – like who was surveyed, where they reside, and their socioeconomic statuses. This omission would show how many “representative” South Africans were surveyed in a country of 58 million people.

The survey not only lies terrifyingly close to the confirmation bias of the SAIRR’s entire fanbase, so to speak, it also sounds pretty darn similar to “research” it did back in 2016, of which the findings are were opposed to those of the Institute for Justice and Reconciliation (IJR) whose Reconciliation Barometer is considered as balanced and accurate. In this survey, the IJR found that over 66% of South Africans do not trust one another across racial lines and that until this was resolved, reconciliation would not be fully achieved whereas the SAIRR’s 2016 survey found that only 3% of South Africans surveyed see racism as a serious unresolved problem. The 2021 survey states only 3.3% of South Africans regard racism as one of the biggest problems facing the country and a mere 16% say they have experienced racism in the past five years.

By their own admission in some instances, the SAIRR has set out to counter the prevailing narrative that racism runs rife in the “new” South Africa and slants toward suggesting that if racism does exist, it cannot be systemic or structural. Rather, the institute insists – like most racists do – that racism is rare and often a result of misunderstanding rather than deliberate and endemic. And completely ignores the lived experiences of millions of people of colour. Not surprisingly, the SAIRR puts the blame on social media for people “noticing” racism (err…) and says the majority of South Africans agree that racism allegations are an excuse used by politicians to cover up their failures. “Everywhere-racism is pushed as a kind of opioid for the masses to dull people from confronting the real problems, but most people have already kicked the habit,” the SAIRR says on its website. “Still, fake allegations of racism are a profitable business, especially in the upper echelons. All manner of race hustler businesses and consultancies are springing up that inflate and exaggerate the extent of racism in schools, communities, and businesses in order to win contracts and tenders to address the allegedly ubiquitous crisis.”

ERROR 404: Racism not found? This flawed logic basically says that if you do not see or hear racism, it doesn’t exist and not even a hipster will buy the album.

It’s easy to see how skewed the stats are so let’s not insult South Africa’s intelligence here. But let’s look at the language of this campaign and its supporters. It comes off as … clever-clever. Like a pun well-rehearsed to tell every group of friends until it’s no longer funny except to you. The seemingly tongue-in-cheek “finding” is touted as the main takeaway from this survey that supposedly represents South Africa. Someone pointed out that it says “Racism is not THE problem, but it is A problem” and SAIRR’s supporters attacked them like rabid mice, slowly breaking down their absolve with “YOU are the problem” rhetoric until they fled the Facebook page. That in itself shows how glaring the intention of the survey is; to embolden racists and racist discourse. The language used by everyone on their social media was indicative of racists using the “failures” of a democratic South Africa to gain a feeble status of legitimacy for their racism. As if, “We gave them a chance to run the country but look at what theyve done”.
They.

And the SAIRR is the one insisting that the corrupt are race-baiting and that there is none elsewhere … except it’s right on their page.

Us.
Them.
If there was any more division in this so-called debate, Pink Floyd would have to write a song about it.

The survey is nonsense, I think we can all agree. That in itself is shrug-worthy at best. But pushing this rhetoric denying the existence of racism serves to absolve those who perpetrate and perpetuate racism and its structural power. If racism exists, it has to be dealt with and organisations like this one would not get to pass Go or collect R200. Instead, what the SAIRR has done has created the get-out-of-jail-free card for racists who are only repentant when they get caught and a big middle finger up to victims of racism who are now being told that experience is not racism and that they don’t have any reason to feel oppressed even if they are.

Like, don’t blame Koos for calling you the k-word and beating you. He’s just modelling his character on a politician whose name he can’t pronounce.